skip to main | skip to sidebar

This blog is now closed


For all the latest news

Posted by THE MADRID PLAYERS at 2:02 pm No comments: 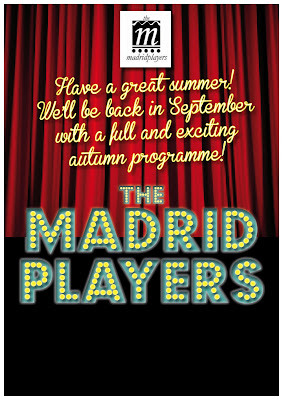 Posted by THE MADRID PLAYERS at 10:54 am No comments:


The Madrid Players presents its last production of the season,

WARNING: MAY CONTAIN NUTS is being performed on

You can reserve your tickets now by emailing

is the collective title for two one-act plays which may make those who see them question their acceptance of reality. What is the truth? Is it what we perceive it to be, regardless of what those around us think?

In CONFUSION an old man, his daughter and the workers in the home where he lives are faced with problems created by his view of his world, and those who inhabit it.

BEING SECTIONED considers the relationship between a husband and wife, and whether either of them is telling the truth when one of them calls the social services.

Victor Gibson is an experienced author who has written professionally for over 20 years and has had three books published. He has written a number of plays, some performed in both Madrid and Edinburgh during the festival.

The plays contain some strong language and occasional moderate sexual references
Posted by THE MADRID PLAYERS at 10:30 am 6 comments:

THE MADRID PLAYERS
The Madrid Players is an English‑language theatre group based in Madrid, founded more than forty-five years ago. There are nearly 100 members from many different nationalities, mostly from English‑speaking countries, but we also have Spanish members and other English speakers. From Shakespeare to Pantomime, Cabaret to Classics, we do it all... Come and join in!